The emergence of a digital ecosystem in Africa and Middle-East

In a context of falling raw materials prices, 2016 was a dark year for the region, and especially for sub-Saharan Africa, with an historically low rate of economic growth. But a recovery is expected in 2017, thanks to rising oil and precious and semi-precious metal prices, and a return to growth in major countries such as Nigeria, South Africa or Angola.

But a dynamic digital ecosystem

Despite which the telecoms sector remains dynamic, thanks to a steady increase in the number of SIM cards and mobile users, and especially a surge in mobile broadband deployment and adoption. Telcos continue to invest in high-speed mobile networks and, at the end of 2016, there were over 100 active LTE in the region’s 43 countries, most of which began operating in the past two years. These trends are bound to continue, with the number of mobile users forecast to almost double by 2023, while 3G and 4G access are making steady strides thanks to a steady decrease in smartphone prices.

If mobile is the main way that users in the region access the Internet, fi bre to the home (FTTH), which is already well entrenched in the Middle East, is also making inroads in South Africa, East Africa and the Maghreb. And we could see life-size 5G trials during the World Cup football championship in Qatar in 2022.

Over in the services market, the region has typically been a land of innovation, both in vertical sectors and consumer services: the emblematic success of m-money solutionsof course, but also information services for farmers, e-learning solutions, e-health applications, the emergence of e-commerce… every sector of the economy is being affected, with a wide variety of models in play, ranging from private enterprise to crowdsourcing. We are also seeing an underlying trend towards e-government, both in terms of infrastructure and services, which also includes smart city projects.

2016 was also a banner year for fundraising for start-ups, above all in the region’s pioneering countries, Nigeria, South Africa, and Kenya, but also in a number of countries in Maghreb, French-speaking Africa and East Africa. So the digital ecosystem is indeed taking shape.

Ultimately, even though the economic downturn forces us to scale back our previous forecasts, the telecom services market in Africa and in the Middle East will still be enjoying stronger growth than anywhere else in the world: around 2.8% for the next five years across the region and 4.2% in sub-Saharan Africa. And countries like Nigeria, Iran, Egypt and South Africa will play a decisive role in sustaining that growth.

Today only one in four people in Africa have access to the Internet, and one in two in the Middle East. Coverage in rural areas, where more than half of the region’s population resides, is still lacking, due in large part to RoI issues for cellular operators. Satellite offers a solution to this problem, and the ability to share connections using Wi-Fi hotspots. The more innovative balloon and drone-based solutions being backed by Google and Facebook have come up against the harsh realities of failed trials, with two drones crashing during test flights, along with regulatory obstacles for Google’s balloons.

Financing networks is a key issue, with funding coming from a variety of sources: purely private sector, public sector or a combination of the two. In addition to institutional partners such as the World Bank and the DigiWorld africa & the Middle East 2017 10 Multiple challenges ahead African Investment Bank (AIB), mobile operators are working to improve their return on investment, with tower sharing and outsourcing solutions. Meanwhile federal governments
are devising innovative financing models, including schemes that combine private and public monies, and public-private partnerships (PPP) which are becoming increasingly common. Also moving things forward are regional alliances such as the East African Community (EAC) which is working to create cross-border backbones and decrease roaming costs.

The lack of content local is another impediment to the Internet’s development in the region, with some countries also grappling with widespread illiteracy: the content available online is mainly in English or French, but most of the population does not speak these languages. At the same time, very little local content is being created – a good example being the contributions to Wikipedia of which there are far fewer being made in Africa than in the rest of the world. And the situation
persists, despite the region being anything but a cultural wasteland, with powerhouses that include Nigeria’s Nollywood, the world’s second largest producer of films, as well as Egypt’s TV production industry.

A market that is whetting foreign appetites

A telecom market in the throes of concentration

Africa and the Middle East are home to several major pan-regional carriers, starting with a small handful of local leaders: South Africa’s MTN; Etisalat from the UAE and Saudi Arabia’s STC, all of which have built out their domestic footprint. Also on hand are European and Indian carriers in search of  growth outlets: Vodafone, Orange, Millicom, Bharti Airtel. The region’s fi ve biggest operators, namely MTN, Vodafone, Orange, Etisalat and Airtel, together account for
close to half of all telecom market revenue.

But the fi erce competition in certain countries (as many as six mobile licences have been awarded in some countries) coupled with the need to fi nance 3G/4G network rollouts, will undoubtedly result in national and transnational mergers and acquisitions, as was already the case in 2016. 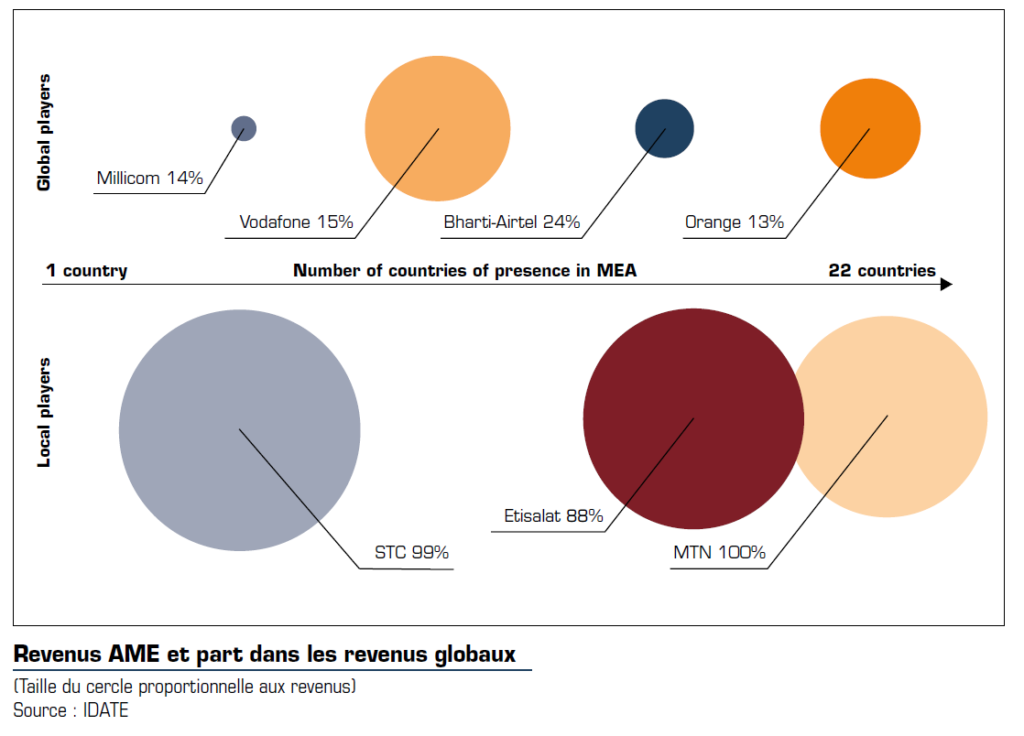 American heavyweights, starting with Google and Facebook, have set their sights on Africa and the Middle East. Google is especially present in the region with dedicated services loaded on devices, while Facebook is rolling out the Free Basic platform, in partnership with operators. But Chinese players could really shake things up: after having acquired a share of the equipment (ZTE, Huawei), device (Transsion) and content (StarTimes) markets, their next target could well be the
services market. A case in point: the WeChat platform has been launched in Africa, with its model that incorporates messaging as well as a payment solution, e-commerce and content.

Measure how the economics of the telecom sector and its environment are evolving, to anticipate change and assist in decision-making, as much for public authorities (regulatory policies, market organisation models…) as private sector players (investments, positioning, products…):