E-Sport: a high potential market, which could reach 3 billion euros by 2021

Twitter LinkedIn
The sector's economy is not yet generating the kind of revenues its popularity would suggest. By the end of 2017, IDATE estimates that e-sports revenues will not exceed 850 million EUR. By 2021 they could exceed 3 billion EUR and this could rise to 10.5 billion EUR by 2030.

The world of e-sports is an emerging market and its current value does not reflect the large revenue it is likely to generate in 10 years’ time. It is a segment of the video game market. Publishers that are embracing changing consumption patterns and innovative user experiences are already seriously exploring it (EA, Activision Blizzard, Valve Software) to the extent that they are permanently refocusing their publishing strategies. Publishers ignoring e-sports risk losing out on a significant and lasting growth driver.

However, it is growing outside the video game publishers’ ecosystem, driven by gamers, promoters and other tournament organisers, and league and championship creators. The e-sports business model and its monetisation has been implemented outside the control of rights holders. The gaming community is setting its own rules and business models. Rights holders, especially games publishers, are now wanting to regain some control by capturing all or some of the value generated from their content.

Over the last three years, e-sports has attracted interest from outside its microcosm from various industry groups whose core business is related to video games to varying degrees: TV and media, communication groups, major consumer brands and casinos. This interest has arisen from the rather sudden realisation that the phenomenon is hugely popular with many gamer generations, especially millennials and “digital natives”. According to Newzoo, they account for at least 50% of the audience of the main e-sports titles (LoL, CS: GO, Dota 2, Overwatch, Hearthstone). Video games are part of the culture of this generation. Millennials have adopted them as a regular recreational activity and have adapted the playing of video games to create a new kind of sports competition.
E-sports are now followed by an increasing number of these young consumers, whose recreational activities related to viewing entertainment are much different from older generations. Advertisers can therefore engage with millennials through e-sports events. Moreover, e-sports provide ways of understanding the behaviour of a segment of this generation that has grown up with the Internet and considers digital as the norm.
A number of metrics gleaned from e-sports have caught the interest and even amazed various stakeholders in the digital and media economies: 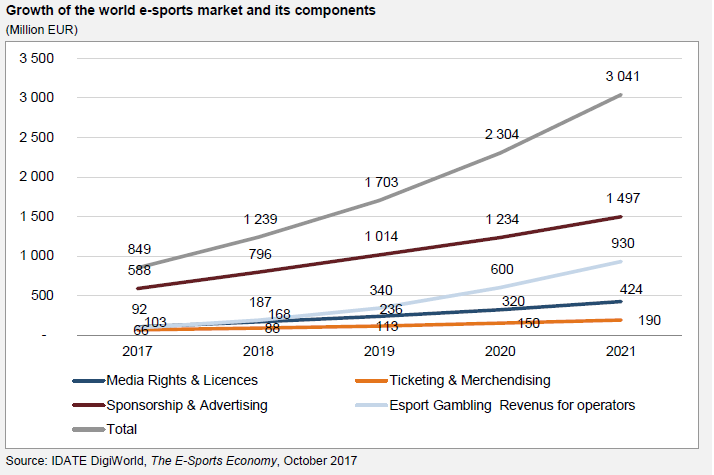 Western TV broadcasters are starting to air tournaments: TBS, ESPN, CW, BBC and now Disney XD. But many challenges remain, including the understanding of the generation of digital natives. The players in the sector will also have to widen the audience of e-sport to the general public, by encouraging the starification of the teams of players.

Beyond the audience, the various actors will have to develop technical tools throughout the value chain.