IDATE DigiWorld has just released its latest market report on connected cars, which is part of its ongoing series on the Internet of Things and M2M.

The report provides an opportunity to take stock of a major market whose rate of development appears to be accelerating, with a series of announcements, veteran industry leaders such as Mercedes talking about driverless cars, the rise of newcomers such as Tesla, and connected car projects coming out of China, as foreshadowed by the new joint-venture between Internet giant, Alibaba and one of China’s first car-makers, SAIC Motors.

This is a market that every stakeholder along the value chain is gearing up for.

The strategy of most manufacturers is to make their cars connected. The main driver here is based on the regulation related to safety issues in Europe and the underlying revenue opportunity for them. In the USA, the recent GM announcement to embed 4G modules in all new cars is seen as a key trigger for market take-off. For telcos, the revenue opportunity could be interesting as the connected car will generate traffic that telcos will charge for indirectly (through the automobile manufacturer).

All main M2M mobile carriers are involved in the connected car space, as the connected car represents one of the major markets in volume. In a context where their traditional mobile revenues are flat and even declining in some regions, providing mobile connectivity in cars is a key business opportunity for telcos. Beyond car-related applications in driver assistance, from the perspective of a telco, the car can be seen as an additional cellular device, with a potential high-consumption service profile with such usage as the mobile Internet, entertainment on demand and mobile hotspot features. The prime business model remains the traditional wholesale relationship (B2B2C), even though some telcos like AT&T try to address end users directly through B2C models (through a retail data plan) and the integration of an automotive into the mobile share plan.

For Internet players, the strategy here is clear: the automobile is an additional connected device just as smartphones, tablets and laptops and needs to be addressed. However, Apple and Google do not have really the same approach. Indeed, whereas Apple aims to introduce its technology to interface with its products, Google is promoting the embedment of its technology into the car as a regular device. Google also wants to collect data to provide the most accurate advertising as possible, such as a related point-of-interest, based mainly on location.

A market that is starting to take off

On the market side, according to IDATE, in 2020, 420 million automobiles will be connected, representing a 34% CAGR on the 74 million connected vehicles in 2014. Nevertheless, this growth is not homogeneous for each category of connected cars. The embedded systems will lead the market by 2020.

Asia will lead the connected car market in 2020. Europe benefits from a 39% CAGR by 2020, mainly thanks to eCall regulation, entering onto market by end-2018.

In 2020, connectivity revenue for connected cars will exceed 9 billion EUR. In value, North America will be the leading zone, mainly due to higher ARPU than anywhere else in the world both for telematics and infotainment offerings. This encompasses direct connectivity through embedded systems but also indirect revenue related to smartphone usage. The major issues to be raised here are on the real willingness of the user to pay for such services. To encourage users to subscribe, telcos and manufacturers are already contemplating different revenue models including share plans. All the same, adoption is likely to remain limited over the next five years. 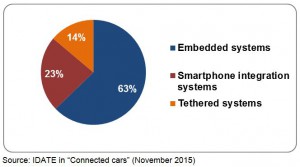 The headlines are full of the self-driving vehicle, which is on everyone’s lips in the industry. Automation could be framed at six levels, ranging from zero autonomy to fully automated. The leading manufacturers are, at the first steps, mainly luxury car providers. The traditional car manufacturers are focused on the semi-autonomous route, but the ‘upstarts’ from the realm of the Internet, such as Google and Apple, are straightaway testing the waters of the fully autonomous car. Nevertheless, many issues need to be removed to see the self-driving car market take off. Currently, they are legal (on how to handle accident responsibility), cultural (seeing no real demand from end users) and economical (on who will fund the infrastructure).

in our dedicated market report