Robotics: a meteoric market which will grow to above 90 billion EUR by 2030

In their own shiny way, reflecting their designers’ desire to ape human looks, robots today personify much of the future path of humanity.

In the digital economy, the early surge of robotics is a fundament of the digital world. The present growth spurt in robotics is almost unprecedented, especially in selected strategic sectors.

Overall, the robotics market will grow to above 90 billion EUR by 2030, with almost 13% CAGR from 2018 onwards. This is the prime finding of the new report on an IDATE study on ‘Robotics: A meteoric market, flying high on the digital transformation of vertical industries’.

That growth is a blend of ‘more of the same’ in automation processes, plus novel sectors driven by digital innovation. Overall, the market report provides market forecasts in value for the robotics market up to 2030 with breakdowns by vertical industries and use cases. 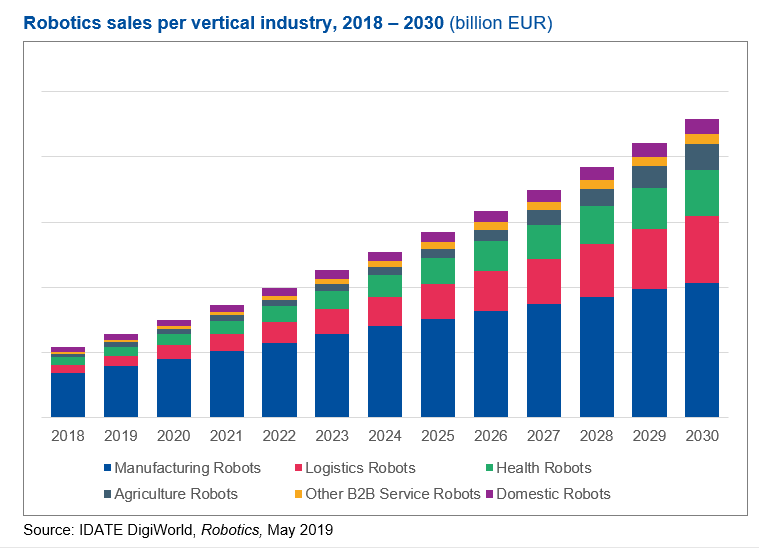 MAKE IT, TAKE IT, BEND IT, MEND IT

“The main vertical market for robotics over the period will continue to be manufacturing industry. This will primarily be thanks to an already well-developed traditional industrial robot market and to the development of collaborative robots and exoskeletons”, states the report, rich in some 60 pages of analysis, backgrounders and data.

The manufacturing sector will more than double in size over the period, on its momentum as an early adopter of robotics some five decades ago. All in, it will account for some 44% of the world market. The various thrusts of ‘Industry 4.0’ digitalisation will clearly bear fruit here, as will the magnet of the autonomous vehicle and associated mobility stakes.

Next, logistics and healthcare industries will catch up from their already visible but still low levels to, together, comprise almost a quarter of the entire market. Their hot spots will, respectively, be in warehouse management and last-mile distribution and in remote and robotic surgery, and in telepresence services as mechanical home carers – the latter with a special eye on the monitoring and ‘maintenance’ of an ageing population.

MEANWHILE, DOWN ON THE FARM

But it’s agriculture which is seizing the most attention in the first half of 2019: indeed, ‘Smart Farming’ was the focus of another recent IDATE study. Between now and 2030, it will come to occupy a significant part of the world market. This expansion will ride first on the back of milking robots – already well underway – and, from 2025 on, of field farming robots. Here, the resource-saving and production-raising potential of ‘precision’ farming and digitised machinery will drive much growth. A transitional phase, now shaping up, will see robots put to work on monitoring livestock and phyto (plant) health.

The advent of robotics in the agriculture vertical is emblematic of their later generations in other verticals. It is clear that their core growth comes from sectoral pressure, in turn often driven by a blend of industrial, consumer and environmental demands – as in farming.

INTRODUCING THE FAMILIES AND TRIBES OF ROBOTS

In a clear parallel with human development, the diverse typology of the robot is, literally from day to day, widening in scope. One revealing section in the report describes existing and emerging technologies for robotics sensors, actuators, robot behaviours, communication and user interfaces – their potential, and their limits to growth. And running through the report is an analysis of the interactions of robotics with other emerging technologies (artificial intelligence, 5G, IoT, augmented and virtual reality), as well as a vision of the impact scenarios of digital transformation trends – again: Industry 4.0, smart agriculture, connected health, autonomous cars – on the development of robotics.

One early reaction to the report, in its final production phase, referred to the term ‘meteoric market’ in its sub-title. “Shouldn’t that be ‘stellar’ instead”?, it was asked. Time, and the robots, will tell.

To get more info about this topic