IDATE DigiWorld, Europe’s leading digital economy think tank, takes stock of the deployment of e-health devices for seniors around the globe. Its goal? To rank the countries developing the most innovative solutions for guaranteeing healthy ageing, and enabling fragile and dependent persons’ access to care.

Telecare for seniors: a booming sector with tremendous growth potential

With an average 85% of seniors saying they want to grow old at home, the smart ageing market has substantial potential to grow. And the globe’s ageing population will no doubt only accelerate the trend.

Telecare is the market enjoying the strongest growth: between 1% and 15% in the countries that were studied. The market is evolving towards innovative solutions that combine the smart home and e-health universes. The telecare market not only enjoys strong growth potential, but is also expected to steadily encompass a broader range of targets, such as fragile and dependent people.

By 2025, 9% of the planet’s senior population are expected to have a telecare device, with 78.1 million telecare units shipping worldwide.

Smart ageing: the UK and the United States top the global rankings, followed closely by France

Based on the most advanced government programmes for seniors around the world, IDATE DigiWorld created a 10-country benchmark[1] to rank them by most innovative on the e-health front.

The UK, the United States and France top the ranks. These are the countries where savings on healthcare spending are expected to the be greatest, thanks to the use of telecare and telemedicine solutions. As new technologies develop in the health sector, resulting reductions in public healthcare costs are estimated at an average 1.2% in 2018 –  a figure that is forecast to increase significantly in the United States, the UK and France.

In France, the government has made e-health a priority, adopting the My Health/Ma Santé 2022 scheme this past June. And the Libault report, delivered to the government in late March 2019,  suggests investing 40 million euros to install telemedicine solutions in all of the country’s housing projects for dependent elderly people (EHPAD). 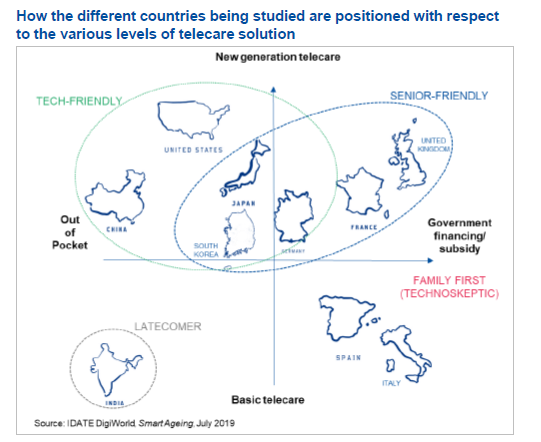 Levels of telecare provided in the 10 countries being studied

SAVE THE DATE : See you on November 20 for the DigiWorld Summit and check out the “Healthcare” talk programme

Want to know more about this report?