Who are the global 5G champions?

LinkedIn
A new IDATE DigiWorld ranking puts south korea on top. What is the status of 5G rollouts around the world? Using a unique evaluation grid, a new report from Europe’s leading digital economy think tank, IDATE DigiWorld delivers a rundown of the countries emerging as the globe’s 5G pioneers.

This ranking compares 11 countries from around the world. This includes European countries such as France, Germany, Italy, Spain and the UK, as well as non-European nations such as China, India, Japan, South Korea, Turkey and the United States.

For the first time ever, this ranking analyses 5G rollout conditions based on six criteria:

South Korea’s lead can be attributed in particular to the exception development of 5G networks and infrastructure, in what is a relatively small country. After the pioneer launch last April, South Korea plans to achieve virtually complete nationwide 5G coverage.

The United States is also in good stead, and was the first to launch 5G back in late 2018. Despite which, it still only ranks second due to disparities in infrastructure deployments across the country.

How do European countries rank?

Among the European countries examined by IDATE DigiWorld, the most advanced is the UK. It has been developing 5G since May 2019 – targeting a range of markets such as automotive, manufacturing, media, entertainment, e-health, public safety and tourism.

Spain is in second place and is deploying 5G technology for farming and logistics markets in particular.

Over in Germany, while the official launch date for 5G has not yet been set, the country has already elected to focus its innovations on the e-health and media sectors.

France and Italy are more or less tied, and expected to catch up quickly after having awarded 5G licences, which has already happened in Germany and the UK.

The five European countries that are in the global rankings are planning to launch 5G services via operator EE by 2020. The main cities and transport corridors are expected to be covered by 2025. 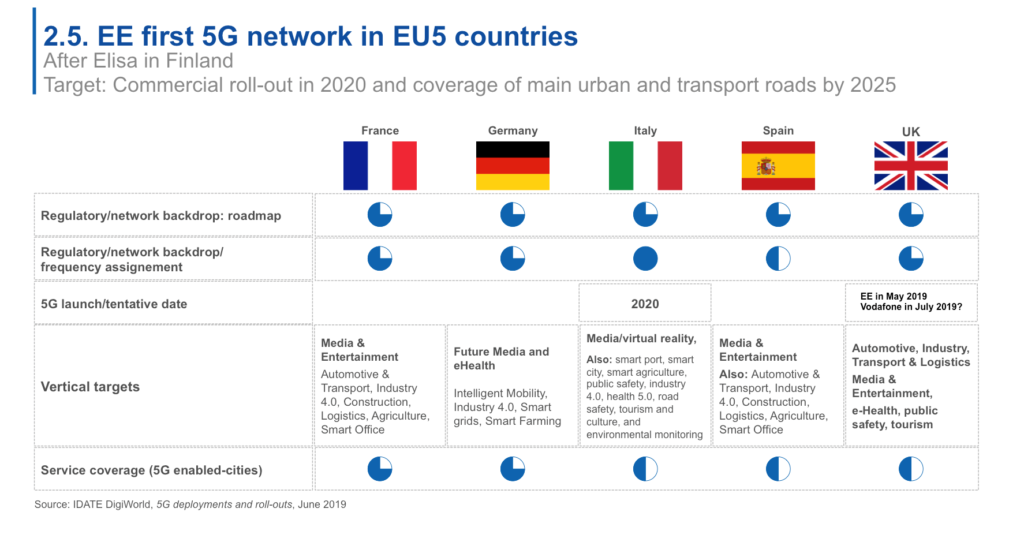 And what about France?

Despite lagging slightly behind global pioneers, the US and South Korea, France should be ready to launch 5G in 2020, in line with the H2020 targets set by the European Commission.

IDATE DigiWorld will be publishing a White Paper on 5G in France this summer. It will detail the upcoming stages of France’s 5G rollout roadmap and timetable.