M-money: a host of challenges in an African changing market

LinkedIn
Africa has been a pioneer in the area of m-money: more than half of the world’s m-money solutions were fi rst launched in sub-Saharan Africa, where a great many people are not banked (i.e. do not have a bank account). The region’s tope telcos, MTN, Bharti Airtel, Orange, Vodafone (Safaricom), Etisalat and Maroc Telecom, have all introduced m-money services in their own markets and made them a central part of their development strategies.

A growing selection of products

These services, which were originally built around money transfers and recharging phone credit, are tending to expand, and there are now several levels of service available: 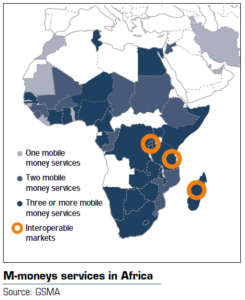 There are various aspects to interoperability:

Although on a very solid footing, the m-money market in Africa is not yet fully mature: it has not taken off in all countries to the same extent, and there is still tremendous room for growth in rural areas especially.

A growing market
There were more than 150 mobile money services operating in the MEA region in 2015, most of them in sub-Saharan Africa. and even though the pace of rollouts for new services is starting to slow, usage is growing steadily: the number of active accounts rose by more than 20% between 2015 and 2016, going from 95 million to 114 million. In certain countries such as Madagascar, Tanzania and of course Kenya, m-money accounts outnumber traditional bank accounts. On the flipside, M-Pesa failed to catch on in South Africa, largely because a sizeable percentage of the local population (around 70%) has a bank account and because the banks there offer competing products. International money transfer services is another high growth area, offering much lower rates than veteran players like Western Union. Orange, for instance, is authorised to issue e-money in both Africa and France, which allows it to manage its transactions without having to go through a banking partner.

Services that target the unbanked, as well as the banked
There is still considerable room for growth in the e-money market: according to the African Development Bank, less than 25% of Africans have access to fi nancial services, a figure that is even lower in sub-Saharan Africa: only around 10%, excluding South Africa. In addition to this segment, people who do have a bank account are also being targeted for online shopping, paying for goods in brick-and-mortar shops, international money transfers and more advanced services. But services are struggling to take off in those countries where a high percentage of people have a bank account, such as South Africa where Vodacom and MTN ultimately shut down their services in 2016. 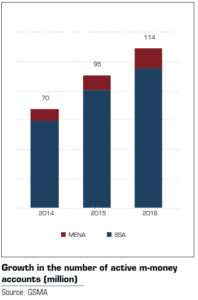 A value-added service
Mobile payment is above all a value-added service for operators: for instance, it accounted for 21% of Safaricom’s revenue in 2015, or more than 350 million EUR. Operators have high ambitions for this market: Orange had set a target of 30 million customers at the end of 2016, up from 13 million at the end of 2014. According to Boston Consulting Group, mobile financial services in sub-Saharan Africa could bring in at least 1.5 billion USD by 2019 and serve a market of 250 million people.

Regulatory obstacles
Some telcos, notably Orange and MTN, have obtained the authorisations needed to be able to issue money, and are thus competing directly with banks. In March 2017, however, the Central Bank of West African States (BCEAO) forbade Orange from transferring between with France and Mali, having ruled it an unauthorised practice. In Kenya, a bill has been introduced that would require Safaricom to spin off its m-money platform, as part of a bid to increase competition. There is also a proposal to open the M-Pesa platform up to the competition.

Measure how the economics of the telecom sector and its environment are evolving, to anticipate change and assist in decision-making, as much for public authorities (regulatory policies, market organisation models…) as private sector players (investments, positioning, products…)