Europe on the superfast track: on a path between Asia and the United States

LinkedIn
IDATE DigiWorld’s participation in the FTTH Council Europe’s annual conference (13-15 February, Valencia, Spain) provided an opportunity to present the 16th edition of its FTTH/B rollout scoreboard for 39 European countries. A singular viewpoint based on hundreds of interviews with telcos and project owners, not only in Europe but also as part of the different FTTH Councils: LATAM, APAC, Middle-East – North Africa and, more recently, Africa.

The good news is two straight years of increase for both subscriber numbers and homes passed. There were already close to 52 million subscribers for 148 million homes passed at the end of September 2017. The increase is especially notable when looking at subscriber numbers: +16.6% in a single year, while the number of homes passed grew by 7% during that time. This proves that operators are focusing more on marketing FTTH access products than on rollouts in some countries.

There are close to 100 million households in Europe that are now eligible to subscribe to a superfast plan, and that need to be won over.

As is often the case in Europe, this acceleration in the rate of adoption in all of the countries being examined hides huge disparities. Looking only at FTTH/B access, several groups can be distinguished among the leading countries:

I should also point out that France is also catching up quickly, with subscriber numbers growing by 34% in 2017. 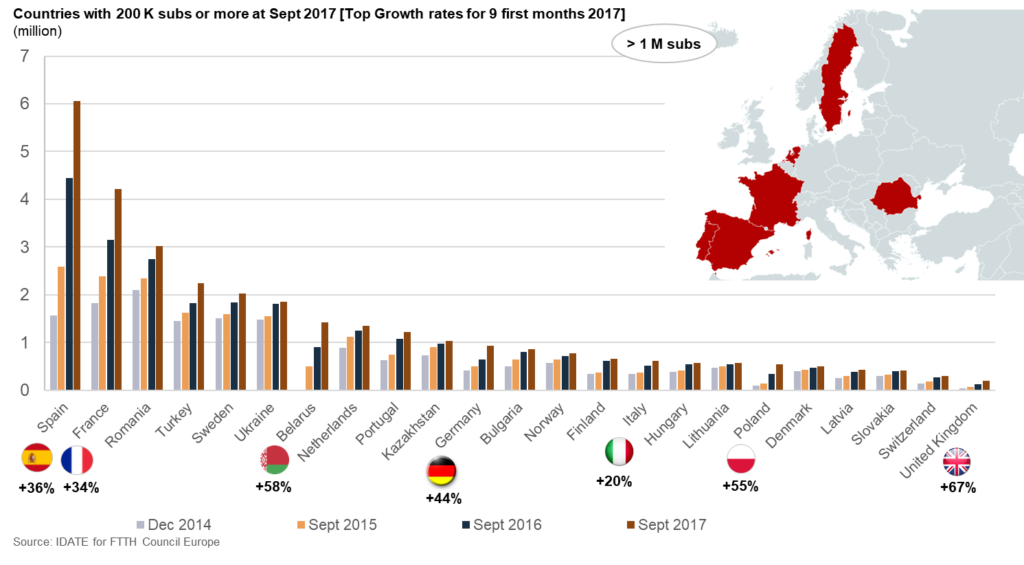 Q: What are the main trends we are seeing at the start of this year?

There are several especially salient points that allow us to identify key trends for the coming years.

Several large European countries are still in the adoption stage, but things are moving fast.

The roadmap for 5G has once again been moved forward, with the first commercial launches announced in Asia, but also in the United States, for late this year. Telcos that have been pioneers on the fibre front will enjoy a competitive edge when the many antennae required to bring 5G coverage to the regions will need to be connected to the fibre network.

Verizon, for instance, plans on upgrading its superfast network by deploying the fibre that, in theory, is meant to ensure that its future 5G network will run smoothly, as evidenced by the 1 billion USD contract signed with Corning (and Prysmian) in September 2017.

This is a lesser known fact, but one that is worth underscoring. The massive demand for fibre for FTTH/B networks coming from Asia and North America is raising concerns about a possible breakdown in the supply of fibre for operators that are currently in full rollout mode.

The fact that demand coming from Europe is spread out over time will allow the region’s operators not to suffer too much from this potential shortage.

Also worth mentioning here is that one of the global leaders in this area, alongside Corning, Prysmian and Furukawa, is Chinese cable layer, YOFC (pour Yangtze Optical Fibre), which is benefitting from the tremendous push by Chinese telcos.

Q: How would you describe Europe’s singular place in the superfast access universe?

The challenge for Europe is to stay the course, to be able to have an infrastructure capable of undergirding the massive development of digital applications in the coming years. This will be achieved by also taking into account Europe’s diversity which, if it only represents 12% of the world’s FTTH/B subscribers today, leads the way in total subscriber numbers thanks to VDSL technology (39% of the global total) and a very solid 29% share of the world’s superfast cable subscribers.

So I remain confident about Europe’s ability to ensure that those key countries that currently lag behind will catch up, by making the necessary investments and reorganising the strategic landscape.