Digital Sovereignty: Can Europe’s digital industry keep pace with the rest of the world?

The idea of digital sovereignty is already well entrenched in China, Russia and the US, and is also developed in Japan and South Korea at least for digital markets.

Europe is now calling for sovereignty, an issue being spearheaded by France and Germany, with a mix of innovation initiatives on next gen digital technologies and of regulatory initiatives to protect EU markets despite globalization. 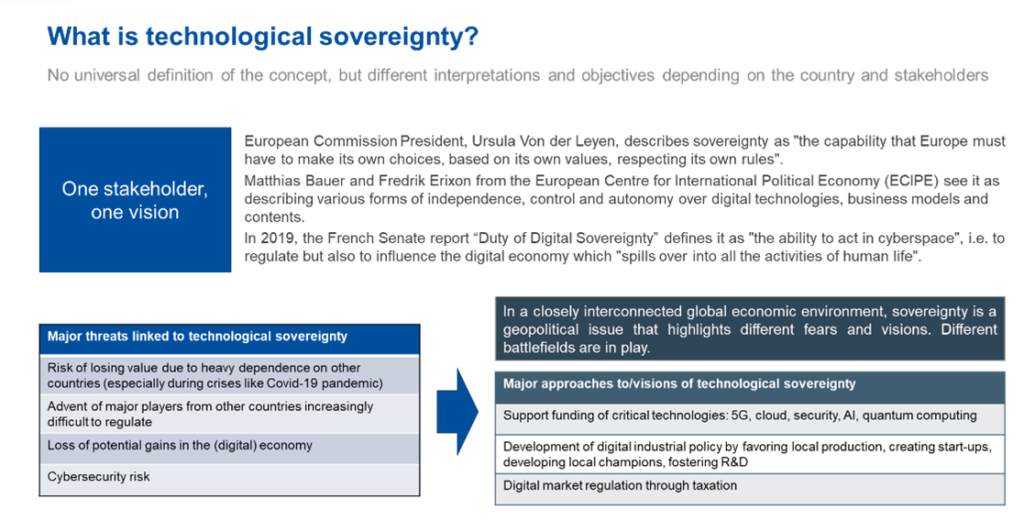 This IDATE DigiWorld report explores the emerging issue of digital sovereignty which, more and more, is being viewed as critical, especially in Europe.

It begins by analysing perceptions of sovereignty in various Member States, and in other regions around the world that have historically been more proactive in this area, such as Russia and Asian countries (China, Japan, South Korea).

The report then provides a benchmark of six key enabling ICT (micro-electronics, quantum computing, cloud, cybersecurity, connectivity, artificial intelligence), associated public R&D funding and industry rankings in the different regions. It identifies the areas where Europe has an opportunity to reposition itself and secure market leadership.

Finally, it delivers a complete snapshot of the regulatory framework being adopted in Europe to develop digital sovereignty.

To find out more about this report, see the detailed online presentation or drop us a line.