Although they are not the leading players in these markets, they are gradually erecting the building blocks to eventually supplant the new Internet giants (Netflix, Spotify, etc.) who have sparked new consumption enthusiasm and created new business models in a changing industry.

Can we talk about a recovery in the growth of these markets today?

After some difficult years, especially for the music and video industry, the content industries are generally experiencing renewed growth, except for the press industry.
While financial results still vary between industries, it seems higher dematerialisation rates are leading to a return to growth (e.g. music and video) or considerable growth (e.g. video games). At the other end of the spectrum, the book and press industries, which are both still strongly dependent on physical media revenues, are between stagnation and decline.

Growth is expected to fall off slightly for the three growing industries in the next few years but will remain in growth (between 6.0% and 9.5% per year on average); while the press and book sectors should experience a slight improvement, even though press revenues will decline.

Across the board, digital is driving growth (+11% per year on average until 2022), while physical revenues will drop (-3.1% over the same period), except in the book sector, where physical sales will continue to grow slightly in parallel with digital sales. The abundance of free content, both legal and illegal, and the development of services offering unlimited content consumption is contributing to lowering the unit value of content and making the profitability potential of online distribution platforms more uncertain. 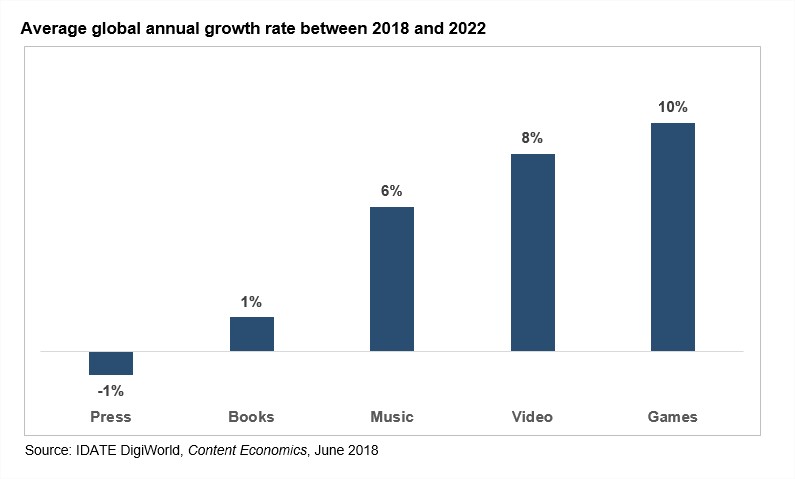 What are the most impacted sectors by the dematerialisation of content?

The current level of dematerialisation in the content industry is extremely variable: less than 10% of press revenues come from dematerialised consumption, whereas this figure is nearly 90% for video game revenues. 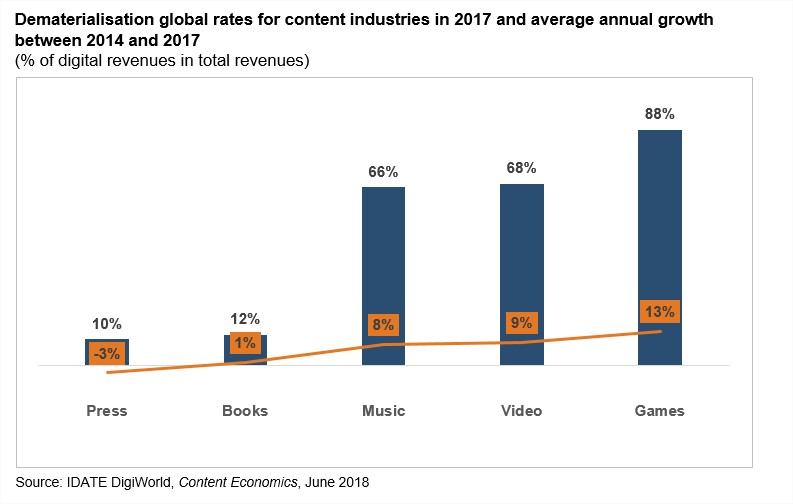 The industries with the highest dematerialisation rates are those experiencing the strongest growth: average annual growth between 2014 and 2017 is between 7.8% and 12.8% for music, video and video games; versus +1.2% for books and -2.8% for the press.

Adoption of the subscription model, which is accompanying the shift in consumption from an ownership model to an access model, is paying off well for the music and video industries, is beginning to attract news publication readers, but has barely taken off in the book sector. Although free access is available through advertising funding, it only accounts for a small share of revenues, except in online press.

The video game sector is a special case because the transition to online led to new types of games being created and different from traditional games on physical media. The business model also adapted to include more advertising revenues (particularly on mobile) and more transactional payments included in the games themselves.

The value is being redistributed all along the value chain. Physical distribution is obviously one of the main victims of consumption dematerialisation, but authors and artists are also suffering from this shift. They are facing a double hit from subscription models and from less profitable contracts between authors/artists and producers/publishers, leading to lower revenues than in the traditional market.

How will new entrants take advantage in the years to come?

Apple, Amazon and Google are steadily improving their services by adding books and even the press to their traditional music and video offerings, by moving from sales/rental models to subscription models, and by offering devices that work seamlessly with their content services.

Meanwhile, Google and Facebook are contributing to development of online news publishing by linking to press sites or by giving them page space, but they capture the large majority of online ad revenues, while traditional content players benefit little.

Because they control the whole ecosystem, these players could seize power from the current leaders and account for more online content distribution, which would probably not benefit upstream in the value chain. 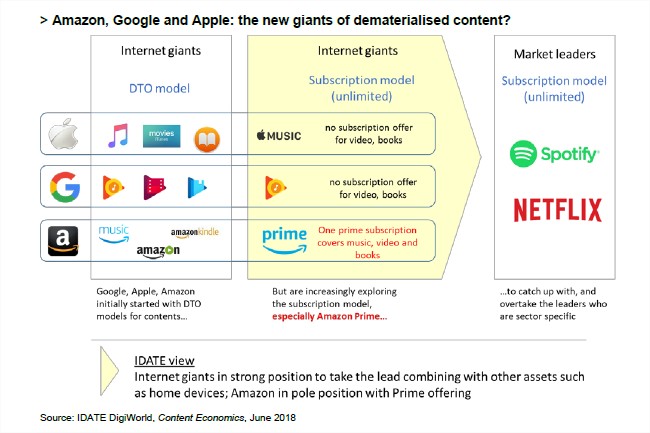