LinkedIn
Despite the European PEPP-PT initiative for a centralised contract tracing system, national responses across Europe have been disparate and unharmonised...

Digital contact tracing does not replace manual tracing, which is conventionally used in pandemic management, but rather serves to complete it. Classic contract tracing remains crucial to help contain the spread of the virus. But digital contact tracing does create the ability to perform the task on a large scale and more efficiently (identification of contacts, and possibly clusters) and so to make the process more cost effective. At least 39 countries have launched contact tracing initiatives (with 26 solutions now available), most on a national level. Their dissemination is nevertheless being hampered by technological issues (availability of devices, especially amongst people who are the most at risk, constraints attached to the use of Bluetooth and/or GPS technologies) and by privacy concerns surrounding the use of location data.

Opt-in digital contact tracing solutions (to quell privacy concerns) are not very efficient in achieving the set goal, even if they are an improvement over the traditional in-person system: any contact tracing system needs to be adopted by a majority of the population (at least 60%) to be efficient. Only collective tracing systems (combining different data without users’ consent) have achieved such levels in China and South Korea, whereas available individual opt-in applications have topped out at 38% in Iceland and 20% in Singapore, the two countries where individual tracing is the most widely used. 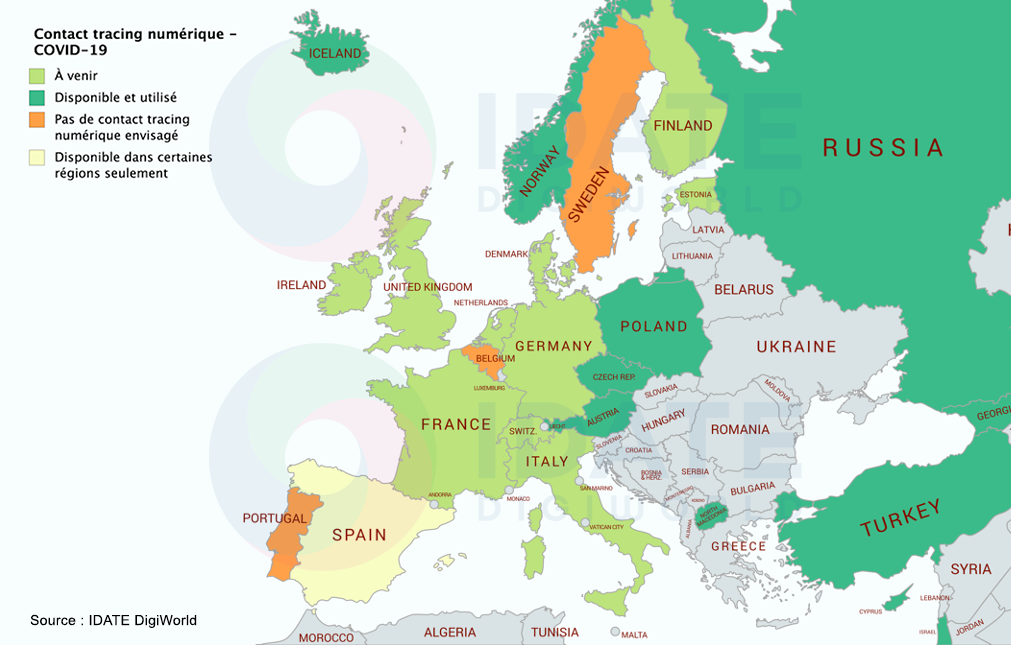 Contact tracing without using the decentralised solutions being developed by Google or Apple is very limited, as these two companies are in the strongest position to solve the background Bluetooth and battery drain issues (especially directly in their OS), as well as the need for massive adoption. Digital sovereignty and data control concerns have occasionally constrained attempts at cooperation between governments and Apple/Google, which have themselves sought to curtail the development of applications deemed invasive, but some governments have already adopted a new attitude (Germany, Australia and probably the UK). Among the technological options, a Bluetooth-based decentralised contact tracing system (contact test with a someone who is contaminated is performed locally by the user) is the most privacy preserving, while also offering a certain degree of individual efficiency. It is a solution that is still being developed, and likely to be implemented mainly in certain European countries (Austria, Germany, etc. ). The other solutions are all more invasive. Most Bluetooth contact tracing systems being used around the world today are centralised (70% of existing and upcoming Bluetooth-based projects), tied to public health authorities (e.g. in France) and have the advantage of being able to detect epidemiology clusters. Other solutions, notably those based on GPS or QR code, are rarer but faster to deploy.

Western nations lag far behind Asian ones in implementing digital contact tracing. European countries’ main source of concern is privacy protection (centralised vs. non-centralised debate and so the lack of obligation) whereas most Asian countries have preferred to develop a solution that works straight away, despite any possible privacy violations (centralised system, possible use of GPS) even if it means readjusting technological choices (QR code systems were only introduced later on in Singapore). Ten solutions are already up and running in Asia-Pacific, compared to only seven in Europe (and only four of those are in the European Union). While Europe remains divided over the best approach (PEPP-PT protocol supported by only a few countries, etc.), it seems vital to have a pan-European solution in place, to reduce costs and enable cross-border trade and travel to resume. The privacy debate is very important in Europe, in line with the GDPR that came into effect in 2018, but also needs to be weighted against the obligations that are typically put into place by manual contact tracing and the exceptional measures adopted to tackle Covid-19 (central register for tracking patients and contact tracing, etc.).

Register free of charge for our Webinar on June 3 at 5:00 pm,
on Contact Tracing, presented by Vincent Bonneau.