Thanks to the advent of 5G, the video paradigm “will shift from a linear value chain to a multi-directional web of interconnections”, states a new benchmarking report from IDATE DigiWorld, entitled ‘5G Video’ and published in march 2019.

With 5G Video, gains are massive and myriad – for consumers, device makers, providers and carriers alike.  It “potentially enables an improved live-streaming experience and the possibility of ultra-high definition broadcasting”, the IDATE DigiWorld report stresses: “it could well open up a worldwide market with millions of smartphones and tablets as potential TV receivers”.

As the Pandora’s box of 5G Video opens up and reveals its true potential, augmented reality (AR) and virtual reality (VR), HD live streaming, 360° views and downloading – until recently just simple dreams – will become the New Normal for digital citizens and consumers.

5G Video’s on a roll

Throughout 2019, 5G Video is going live, in rollouts across the globe, often leaping on the momentum of key sporting events. In Asia-Pacific – the fastest region to leave the starting-blocks – the Rugby World Cup and the Tokyo 2020 Olympics will draw huge waves of interest. Equally, in the North American and European arenas, sporting encounters will trial and showcase 5G Video —  including the qualifiers for the Euro 2020 football (soccer) contest.

And while the initial growth spurt of 5G Video will be in the Media and Entertainment vertical, its lateral impacts on others – notably automotive and transport – will fast spread.

Four Thrusts and a technology

In a nutshell, the first four thrusts to energise the surge in the 5G Video market will be:

New use cases – and incremental opportunities — will follow, predicts IDATE DigiWorld. Beyond clear prospects for enhanced video (including FWA) and 5G broadcasts, the value chain will morph, driven by innovation and content. Market models and solutions will fast emerge.

The report reviews and documents dozens of cases and players in all, helpfully placing them in the broader context of 5G.

All eyes on the ‘Attention Economy’

Future developments will accelerate, according to IDATE DigiWorld’s reliable historical perspectives. So far, the new report observes, “video content and services have been among the key usages and drivers of the take-up of fast and superfast broadband, and could play a similar role in 5G adoption. Demand for audiovisual content and services has never been greater, with incumbent and new services intensely – and literally – competing for eyeballs in the attention economy.” 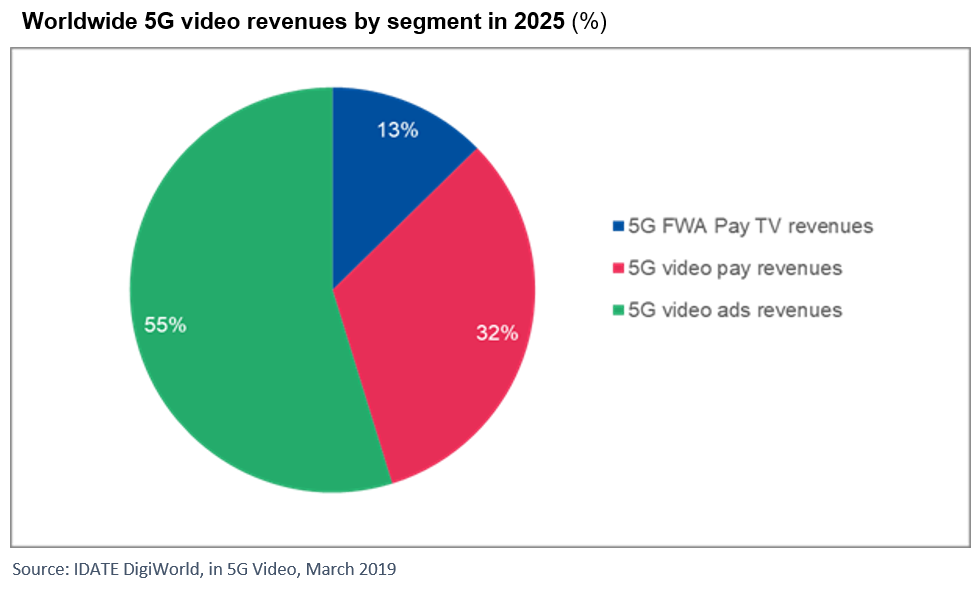 Distilling the extensive data of the IDATE DigiWorld report, the market overall will expand to an exceptional 145 billion EUR by 2030. The leading region will remain Asia-Pacific, followed by the USA and trailed by Europe.

There are, all the same, notes IDATE DigiWorld, limits to growth. Consumer enthusiasm is hotly anticipated but not yet proven – here, IDATE DigiWorld nudges the reader, the price tag is a key determinant. Second, business models have to shake down, firming up the promises of both pay and advertising-based revenue. Third, innovative thinking will be needed to create and maintain new methods of distribution and coopetition between traditionally fierce competitors.

And just who will take the lion’s share of this market?: the front-running telcos, or the mid-league media players, or the ascending Internet giants with their leading roles already in data and Ai, AR/VR and advertising inventory and revenues?