The purpose of this note is to analyse the maturity development of the 50G-PON technology. Considering the current market trends, what is the outlook for 50G-PON technology and how should telecommunication operators consider their GPON upgrade strategy?

During the last decade, the passive optical network (PON) has been the key enabler of broadband optical access worldwide.

According to IDATE, as of December 2021, there were 773 million FTTx subscribers worldwide. According to our forecasts, there should be 973 million in 2025.

PON technology is now a key element to build the Gigabit society that is being deployed in most countries.

The COVID19 situation has reinforced   the need for stronger telecommunication infrastructure. We may expect that public authorities will keep pushing the development of optical networks going forward.

The main driver for each GPON technology upgrade has been bandwidth demand increase. In recent years, video services, gaming services, residential and professional cloud services, and new wireless technologies such as 5G or Wifi6 have been requiring faster transport and symmetric bandwidth. 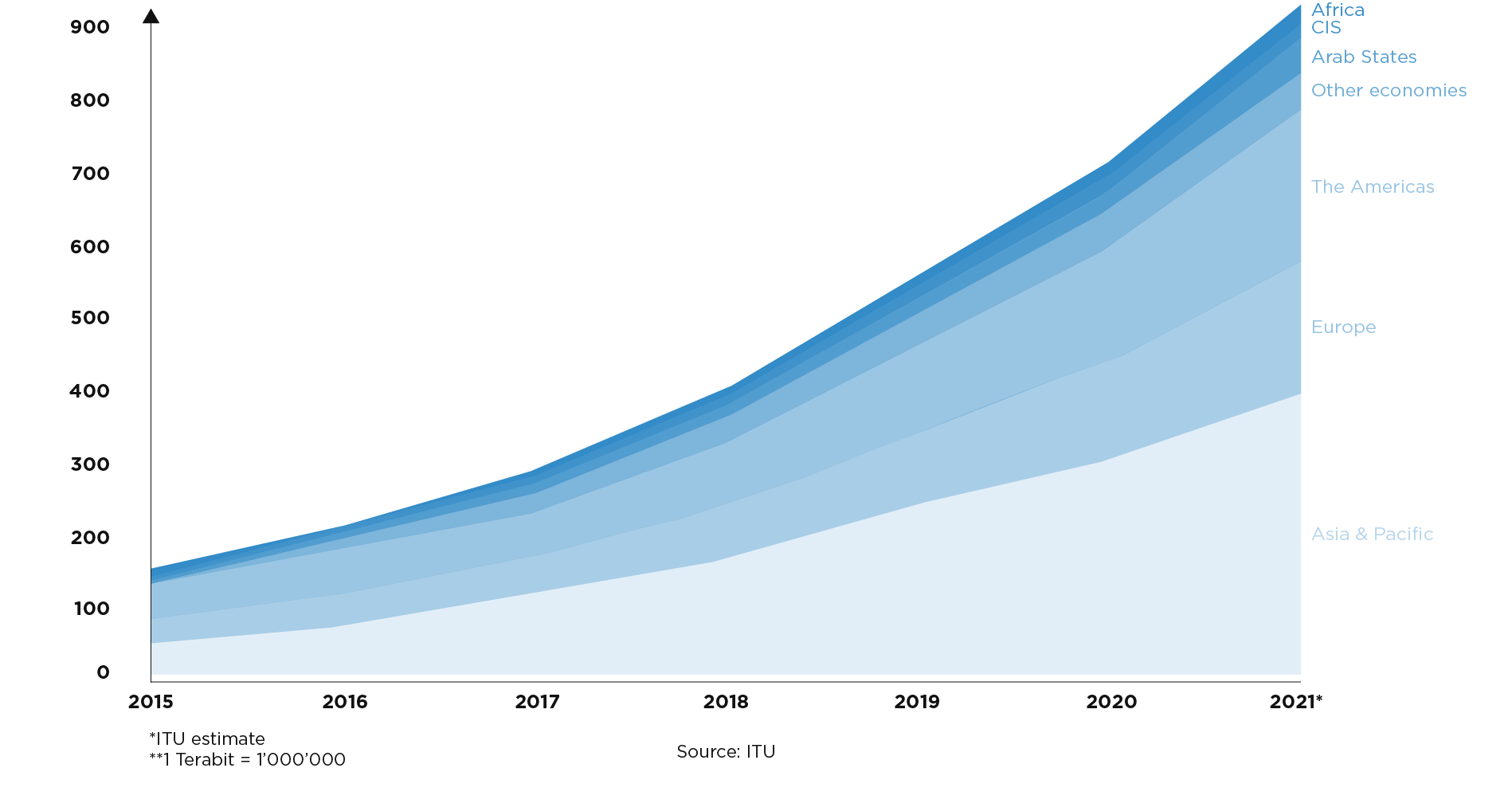 According to ITU, the worldwide bandwidth consumption grew at a compound annual growth rate of 50% from 2015 to 2021. No regions in the world shows sign of growth slow down. Several world regions such as the African continent are starting their journey of fibre optic deployment with countries such as Egypt, Morocco, Senegal and Ivory Coast.

Our world is poised for additional internet speed.

This need for additional bandwidth will put our infrastructure under pressure. As observed in the past, new technologies will require a leap by a factor of 4 at the least to meet customers requirement in the coming years.

We have identified at least two services that will benefit from 50G-PON technology: Wifi7 and mmWave standalone 5G technology.

Concerning Wi-Fi 7, the IEEE802.11be task group developing the new norm was established in May 2019. Release 1 will be available by the end of this year. Wi-Fi 7 will allow a maximum speed of up to 40 Gbps. Current 10G-PON technology would become a bottleneck considering this new wi-fi norm capacity.

When it comes to 5G, the deployment of mmWave antennas supported with a standalone 5G core networks will also create a new challenge for transport. Backhaul of mmWave network will also require a significant increased bandwidth that current technology will barely manage if not bottleneck. 50G-PON technology is also a solution to the deployment of mmWave technology that are just around the corner. 5G standalone network will be massively deployed worldwide from 2023, fostering the need for stronger fibre optic based backhauling capacity.

In order to achieve 5-10Gbps  access on a large scale, not only EPON\GPON but also 10G EPON\ xG-PON are not sufficient, so a higher-speed PON technology is required. When discussing the choice of next-generation PON technology, there are 25G, 50G, 100G and other options in terms of speed.

The difference between 25G and existing 10G may be too small, while 100G is too difficult, and 50G is moderate, which is basically consistent with the previous 4-fold increase (2.5g to 10G). 50G PON is a suitable evolution technology of domestic 10G-PON.

50G PON is a natural step for next GPON technology

We have observed that PON technology generation stretch over a period of 8 to 10 years. Each new generation brings a significant speed increase of at least factor 4.

As seen in the past, the next GPON technology should provide with a significant increased speed to face new customers’ requirements.

In top of standardization, we may also consider the equipment price evolution. Economies of scale is key to assess equipment pricing evolution. Considering the number of telecommunications operators having expressed an interest, we may estimate that their joint coverage of the market represents close to 70% of the total FTTH market. Chinese telecommunications operators weight close to two third of this market potential. We may therefore expect a steady decrease of the 50G-PON equipment at least like the 10G PON price decline.

As a conclusion, we may say that the need for additional bandwidth will be significant in the coming years.

Leading global telecommunications operators, including Telefonica, China Mobile, Etisalat, and Orange, have reached a board consensus to recognize 50G-PON as the next step in fiber development.

Telefonica stated the evolution of Fiber technology towards 50G-PON by means of a multiservice approach. The operator plan to deploy 50G-PON in the mid-term to support the upgrade of its fiber network and mobile backhaul in Europe and Latin America.

China Mobile published the NGOAN (Next Generation Optical Access Network) white paper, which claims that 50G PON is the key technology for NGOAN intelligent optical access network, and suggests that the next step after 10G-PON is 50G-PON.

Orange also mentioned that they are focusing on reusing the existing network resources to reduce the cost of smoothly evolving towards 50G-PON. The operator has already carried out multiples technical tests in Orange countries, including France and Spain, to select telecom partner to develop 50G-PON network.

FTTH networks will be the key infrastructure to support the bandwidth requirement driven by new services.

Be it to connect residential and businesses or to allow sufficient backhaul to mobile networks, telecommunication operators are cautiously reviewing their options.